This was Graham's second visit to us and, as before, he entertained us with the humorous manner in which he communicated his approach to painting. You can read about his previous demonstration here.

He often uses large canvasses for his acrylic paintings but favours a smaller scale for demonstrations. His support this time was mount card which he had coated with pink paint. 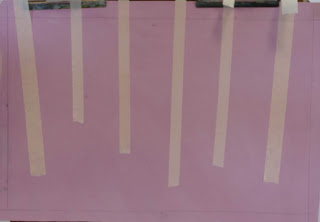 Ten images show the stages of his demonstration. He applied various widths of masking tape while he painted on a background, initially using white and then mixing into it on the support. When the tape was removed the position of the main tree trunks was marked by the pink undercoat. Pink was probably not a wise colour choice as he had difficulty covering it.


Read more »
Posted by LAS Communications at 10:36 No comments: