Eric is a self-taught artist from Bromsgrove and a full member of the International Wildlife Artists as a professional Artist. In his demonstration he show us how he uses light and shadow using a combination of pastel, pencil watercolour pencil and acrylic to build up from a base drawing to a finished creation of stunning detail.

Eric had brought along samples of his work and you can see more on his website http://www.ericwatsonart.com/  Some will remember Eric came to us in September 2013 and you can see images from that demonstration on this blog here

The demonstration picture this time was of a dog standing in water. He had tackled this subject before so he was able to show us a completed painting before taking us through the stages of development needed to achieve a similar result. He had brought along several pictures at various stages of completion so that he could show how each could be developed toward the next stage. 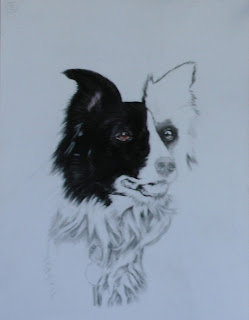 He first showed us how to transfer an image to paper using a grid and datum lines before moving on to a second stage picture which had some black pastel had already been applied. The paper is a heavy smooth general purpose paper with enough tooth to take pastel that he works well into the paper with a finger.

He usually waits until the animal image is about 85% complete before working on the background which he likes to keep fairly simple. If the main subject is dark the background is better kept light for contrast. A background applied first would pick up lots of dark pastel dust from the subject.

The edges of the dog image are drawn with pencil and not pastel. That means he can bring the background right up to the edge, even over the protruding fur, so there is no 'halo effect' around the subject.

Scrap paper is used to avoid smudging and should be discarded occasionally as it will pick up pastel on the back.

Read more »
Posted by LAS Communications at 11:03 No comments: