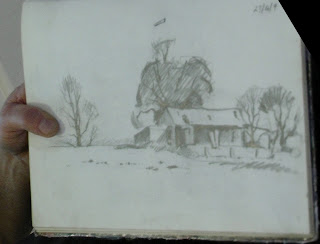 Frank had an early start from Penarth. He is primarily a landscape artist working in watercolour and oils. His work is about capturing the image with bold brush work while trying to convey the light and atmosphere of a place. Consequently, when painting in the field, he uses a limited palette to work quickly and keep things simple.

You can see more about his work on his website http://www.frankcollictart.com/ 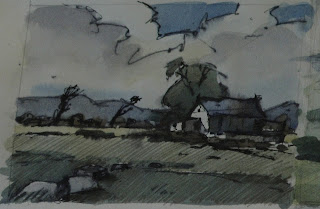 For this excellent demonstration he painted with palette knives. The first two images here show his starting sketch made in the field and a colour visual.

He was happy to answer questions as he painted, particularly when he had to spend time mixing paint on the palette, and he made sure we understood each step along the way.

For the demonstration he worked top to bottom and back to front but his approach in the studio is a bit different and he would usually spend much more time blending colours on the palette to make sure he achieved just the subtlety of colour and tone he wanted.

Frank stressed the importance of painting daily and working outdoors as much as possible. He felt that his painting had developed very quickly once he had plucked up the courage to work outdoors and his work became much more spontaneous, particularly his watercolours. Working with a palette knife had also contributed to the spontaneity of approach, particularly in forcing him to simplify.

Read more »
Posted by LAS Communications at 20:02 No comments: