Workshop - Seascapes in Acrylic and Oil

Colin Ross Jack, who had demonstrated for us in February, led today's workshop at Wellington Heath Memorial Hall. We were glad to welcome a few non-members and to share a day's painting. Colin had brought plenty of his paintings and many photos to serve as inspiration for our own efforts.

He began with a brief introduction to his method which he was able to demonstrate very rapidly, not by painting but by bringing along six canvases, one for each stage. The stages were: 1. paint the canvas/board with thin acrylic in a mid tone; 2. choose a composition; 3. sketch composition with chalk; 4. sketch composition with thin acrylic paint using a small brush to follow chalk lines; 5. acrylic tonal underpainting, dark tones first than lightest lights then mid-tones; finish rocks with thicker acrylic and texture; 6. finally paint it in oil or acrylic ... enjoy!

Adrian Clamp has done some more work on the portrait he began at this month's meeting and has sent us this image. 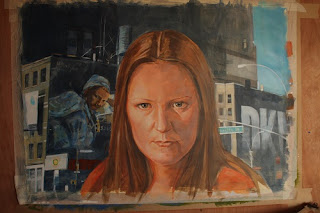 Posted by LAS Communications at 20:39 No comments:

To see a range of works by Adrian Clamp visit his website http://www.adrianclamp.webs.com/

Adrian showed us how to paint a portrait from a photograph using acrylic paint initially and then adding some oil pastel over the top. He worked on paper which had previously been given a coat of cream emulsion paint so he wasn't working on a bright white surface. He had selected the area of interest in the photo and overlayed it with a grid that was used for scaling up.

To scale up he draws a vertical line, with a charcoal pencil, onto his paper where the left side of the painting will be and a horizontal line to mark the top. With the top left corner of the grid aligned with the intersection of these two lines, he draws a diagonal at the same angle as the grid for the photo. The other two sides of the rectangle to contain the
painting can now be drawn in. They will meet at some point on the diagonal. The other elements of the grid can now be drawn. 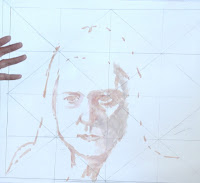 Using the grid as a scaling guide he added marks with paint to indicate the location of some of the key facial features and began his underpainting.

Read more »
Posted by LAS Communications at 19:53 No comments: