Stephen showed us some sketches of cheetahs he had encountered in Namibia. To those of us with no experience of cheetahs, some of these encounters sounded a little too close for comfort!

The sketch above is too elongated to fit to most canvases so they need to be rearranged to suit a painting. While he was sketching the central cheetah sat up which made for a better arrangement so that was captured in a quick thumbnail sketch. 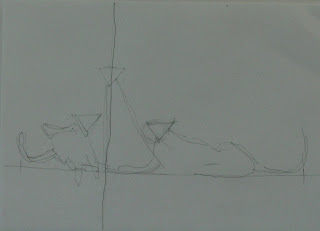 Back in the studio, Stephen would usually do another thumbnail to plan the layout of the painting. For our benefit he made a larger sketch on A3 paper on which he first made pencil marks to divide the sheet into thirds both horizontally and vertically.

The shapes and positions of the animals only needed to be roughly indicated. Notice how they are positioned in relation to the lower and left third marker line.

As they all appear on the horizontal line, he decided that when it came to transferring the image to canvas, the one to the right needed to come forward and the leftmost go back and closer to the middle cheetah. Various adjustments were also made during painting - easy enough with acrylics.

Stephen also had a number of photographs of cheetahs which were used as reference sources for colour and detail.

Read more »
Posted by LAS Communications at 14:57 No comments: