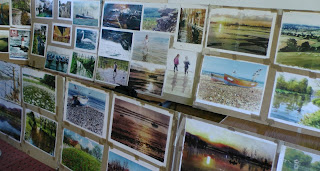 We were faced with an array of Joe’s brilliant images even before he started his demonstration. This was certainly something many of us had been looking forward to and we were not disappointed.

A good source of information about Joe Dowden’s work is his website http://joedowden.net/ where you’ll also find details of his books and DVDs.

Joe certainly doesn’t believe in limiting the range of pigments available to him and he was quite enthusiastic about some of the pigments that have become available in recent times, mainly thanks to the motor industry. Despite the big range of tubes he had brought he did limit the number he used in his demonstration painting.

His brushes were mainly sable but definitely not when applying masking fluid. That’s the time for the very cheap brushes. He does use a lot of masking fluid to save whites, some is painted on, some spattered. The contrast between the white of the paper and the darks created by painting create the illusion of light. 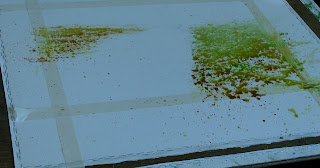 His support was 300gsm Arches rough watercolour paper which had been stretched by soaking it thoroughly, laying it on a board for a few minutes to expand and then stapled along the edges. You can see from the accompanying photo how close together the staples are. When a painting is finished he cuts it off the board. It must take a while to remove all the staples even using a tack-lifter and pliers.

Drawing was fairly minimal. He simply established the horizon and mapped in a few of the main features. Only when the drawing was done did he add masking tape to establish the limits of his painting. Then the fun began with masking fluid painted and spattered on where he wanted to save the whites.
Read more »
Posted by LAS Communications at 21:32 No comments: