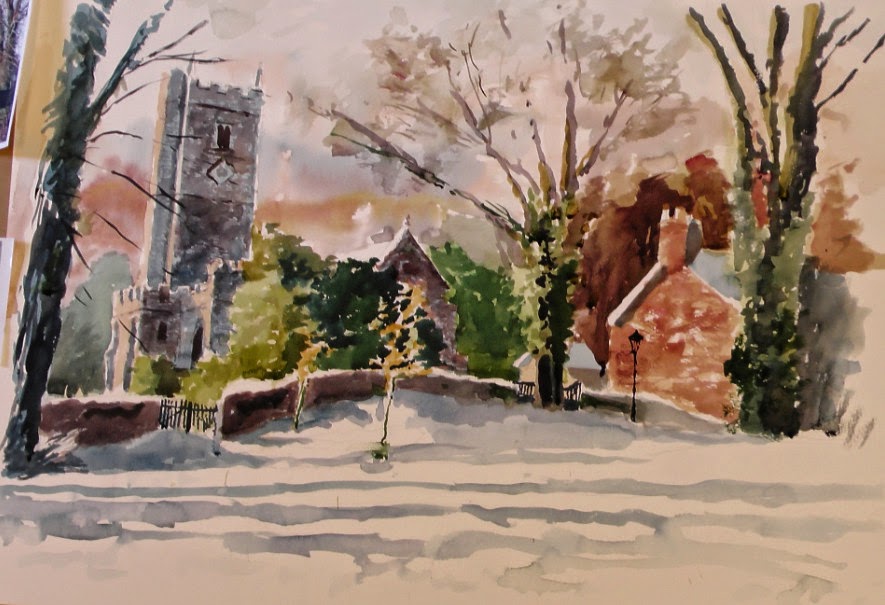 Landscapes are not what we associate with David Wilcox. He is, and sees himself as, a figure painter. Last time he came to us it was dancers in watercolour. This was his first landscape demonstration and the first time in a long while that he had attempted a landscape, though he used to produce many when he lived in Devon. He based his demonstration painting on two photographs: one a Dartmoor village, the other a snow scene painting he had done back in the 1980s.

David works very loosely in watercolour and for his sky he worked quite quickly wet-in-wet. Having his board nearly vertical led to some challenges as wet paint ran rather too readily from the sky. The next step was to wash in some greens for the foliage and then he moved on to put in some shadows on the buildings before adding some texture to them. Once he had added darks for the yew trees in the churchyard the battle to balance out tonal contrasts began. There were several occasions where he found some areas were not dark enough. I'm sure for several of us this is a familiar process when a painting needs constant adjustment.

Yet again, a good demonstration. Attendance was not so good with only sixteen members present on this occasion. It was probably too soon after Easter.

The images that follow show David's paintings at various stages of progress.