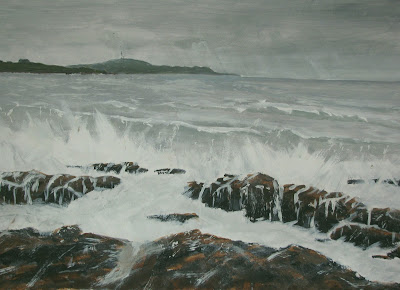 I was inspired by our February demonstration to have a go myself. I followed Colin Ross Jack's method of putting in the two tonal extremes and then developing a tonal painting before adding colour. It's been a little while since I used my acrylics but I worked fairly rapidly and was reasonably pleased with the result. I painted on a sheet of A3 acrylic paper. I used a tooth brush to create the white marks on the nearest rocks and some of the finer marks on the other rocks.

The land in the background is the island of Bressay and the land in front of it is The Nab, a promontory on the edge of Lerwick. When we lived in Shetland we could see these from the windows at the rear of the house. The view in the painting is from a point about 200 metres from our former home.

If others were inspired by Colin's demonstration, please let me have photos that I can post on the blog.
Posted by Richard at 14:33 No comments:


What an excellent teacher Colin is. His combination of humour, story-telling and relevant information about the painting process was lively and engaging and he kept our interest in all he was doing. Much of his inspiration comes from the Fife coast, particularly Anstruther, where he grew up. Although he now lives in Worcester, he frequently visits the Kingdom. As my wife spent some of her childhood living on the Fife coast, I know to refer to Fife as the Kingdom.

Many paintings, including today's demonstration, include the Isle of May, which localises them to Anstruther. Some of the stories he told were about his father, James (Jimmy) Jack, who was coxswain of the Anstruther lifeboat for many years, He was rather fond of standing alongside his portrait in the Scottish Fisheries Museum (painted in 1964 by James Selbie). I have to say the museum is well worth a visit as is Anstruther and all the East Neuk villages.

He normally paints in oils and uses acrylic only for underpainting but the demonstration used acrylic throughout. He works on canvas and primes it with masonry paint. You can see from this image that he begins with a simple drawing.

Here he has added the darkest tones (black) and the lightest (white). Cheap acrylics from The Works are used for this stage but then he moves on to heavy bodied (System 3) acrylics from Daler Rowney.

You can see more of his work on his website http://www.colinrossjack.co.uk/ though the images there are rather small and do not do justice to his work.

Read more »
Posted by LAS Communications at 20:26 No comments: