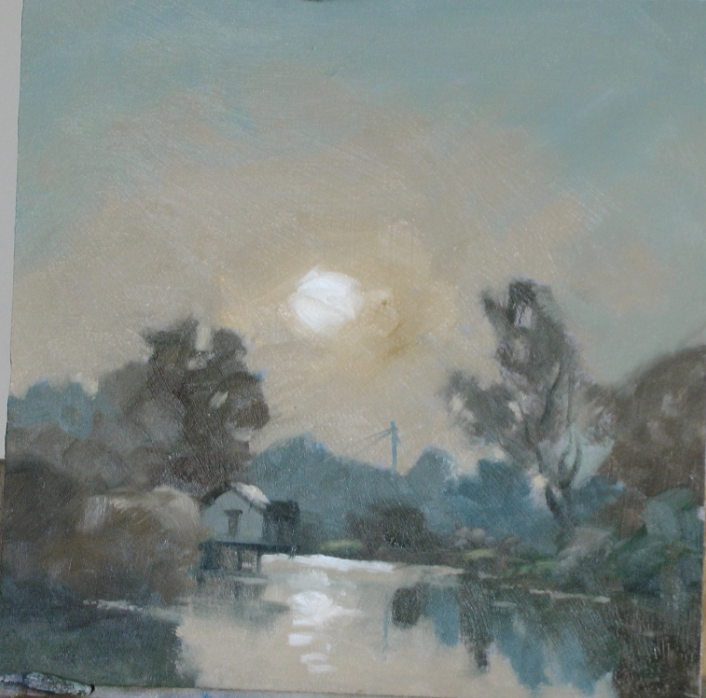 We are very grateful to Robin Holder for stepping in at only a few hours notice to do this demonstration after Mike Skidmore was taken ill. When Robin came to us in February of the previous year he had used watercolour to paint the Severn at Kempsey. This time it was the Severn in Worcester showing the old Rowing Club boathouse behind the racecourse at Pitchcroft. You may have guessed that most of Robin's landscape work features the Severn. He does very little studio work and much prefers to get out in all winds and weathers ... and he's prepared to stand in flood waters while painting! I just hope he's been careful about where he stands in the last couple of weeks as the Severn reached record levels coming slightly higher at Barbourne than it did in 2007.

The demonstration painting was based on a painting that Mike had done a few weeks before. That had the sun coming from the left but for the demonstration he's repositioned it. Even in winter the sun would be higher in the sky when looking south but artists are allowed licence and this painting contre jour allows interesting light to play on the water. The photographs I took were so poor this time that I only include one here and that doesn't show the colour achieved. However, even with the original the tones did suggest moon rather than sunlight.

Do take a look at his website http://www.robinholder.co.uk/ to see more of what he does and find out about the tuition he offers.
Posted by LAS Communications at 15:14